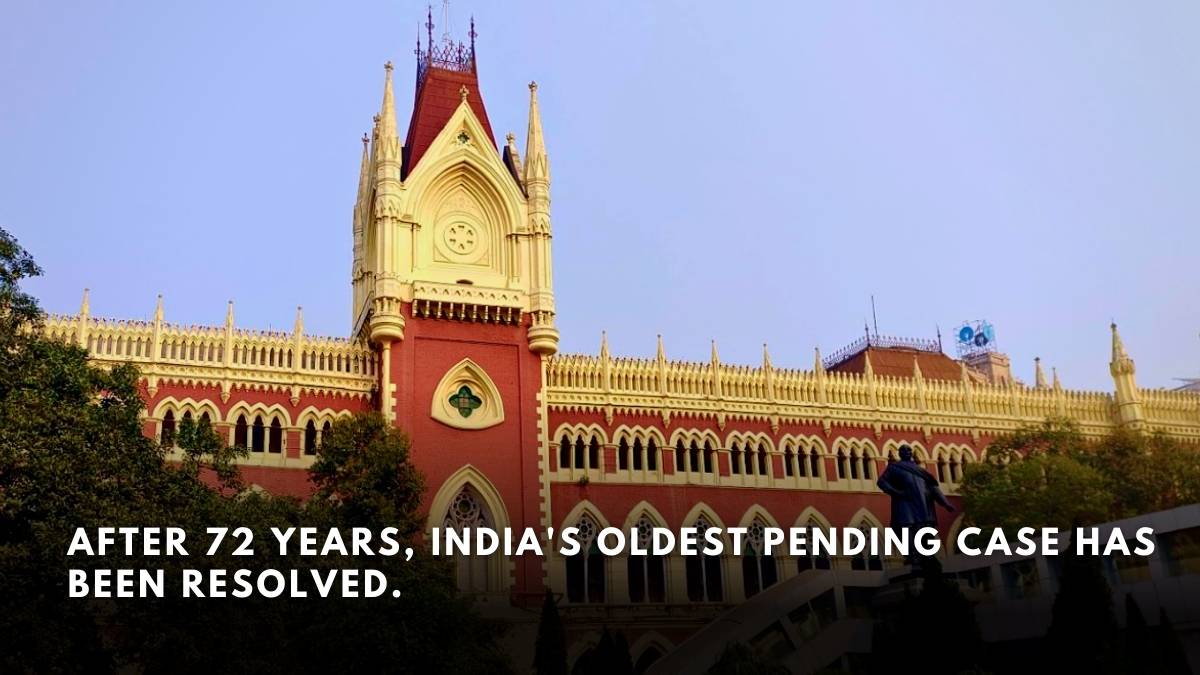 India’s oldest pending case, the Berhampore Bank case, has finally been settled after 72 years. The case, which was filed in 1951 and pertained to liquidation proceedings of the former Berhampore Bank Ltd, was disposed of by the Calcutta High Court last week. The current Chief Justice of the court, Prakash Shrivastava, was born a decade after the case was filed.

While the Calcutta High Court is relieved that this case is finally out of the way, it still has two of the next five oldest pending cases in the country to deal with, both of which were filed in 1952, a year after the Berhampore case. The remaining three cases include two civil suits being heard in civil courts in Bengal’s Malda and one pending case in the Madras High Court. The Malda courts have scheduled hearings in March and November to try and settle these cases.

In the National Judicial Data Grid, there is a reference to the Berhampore case being the oldest case to be heard in any Indian court before January 9, when Justice Ravi Krishan Kapur’s disposal order dated September 19 of last year was signed, sealed, and delivered with a typographical correction.

The case began with an order from the Calcutta High Court on November 19, 1948, to wind up the then-insolvent and litigation-mired Berhampore Bank. On January 1, 1951, a petition challenging the liquidation proceedings was filed and registered as “Case No. 71/1951“.
The Berhampore Bank had been embroiled in multiple litigations to recover money from debtors.

There were a number of these debtors who challenged the bank’s claims in court. Records indicate that the petition challenging the bank’s liquidation came up for hearing in the High Court twice during the month of September, but nobody appeared for either hearing. At this point, Justice Kapur requested a report from the court’s liquidator. On September 19, the assistant liquidator informed the bench that the case had been disposed of in August 2006. It transpired that this information was not updated in the records, resulting in the case remaining on the pending list for a very long time.

Of the two second oldest cases that are still pending in the High Court, Justice Kapur had last heard one on August 23, 2022. The court has directed that an advocate and a special officer meet with all parties and suggest modalities to bring the protracted litigation to a close. In the case of the other 1952 case, there is a very limited amount of information available.

This case serves as a stark reminder of the inefficiencies and delays that plague India’s judicial system. It is a prime example of how cases can drag on for decades, causing immense hardship for the parties involved and clogging up the court’s docket.

The fact that the case had already been disposed of in 2006 but remained pending due to lack of updating in the records highlights the need for better case management and record keeping in the Indian courts. It is imperative that steps are taken to address these issues and improve the functioning of the judicial system in order to ensure that justice is served in a timely and efficient manner.

1 thought on “After 72 years, India’s oldest pending case has been resolved.”