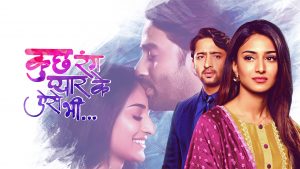 Devakshi’s😍 love story❤ has always been the most loved n mesmerising part of the serial…I m personally a fan of Sharica🔥💜 Watching them act was another part of attachment..shaheer sir,erica mam,supriya mam,moon mam👍👍all very absolutely perfect at their work❣ The bgm’s very amazingly melodious n were beautiful on the couple💖 Dialogues n scenes were also appreciable In short,

This show doesn’t run for decades having the same leads marry a million times and divorce another million times with all unrealistic story twists.

Rather, in reality shows how does a couple manage their relationship as the marriage life expands into kids, their upbringing etc.

The best part is that any festival or function or twists doesn’t take months or weeks to end but shown in a very crisp nicer way.

Looks like good things are never liked by people as i read now that the show is going off air due to low TRP.

The audience have lost their mind and want to see only unrealistic repetitive dramas. Hats off to all actors, director and story writers.. This SOAP will remain an EPIC in Indian TV industry.

The best romantic drama you will ever see.

The thing that is unique about the show is that it gives you an emotional connection with the characters. Other unique features are:

But if you observe carefully you will see that the whole show is based on the Male lead(but so subtle that you will not notice) whereas most shows depict powerful female leads. Though the show is based on the hero, it does not show his heroic acts. It’s just how his life changes when a new woman comes in between the strong bond of him and his mother.

Kuch Rang Pyar Ke Aise Bhi – The explanation about it is beyond my word. I don’t know what I’ll say but it is the Meaning of RELATIONSHIP, RESPONSIBILITY & UNDERSTANDING of Each Realationship to me. It’s not a serial, not reel, It’s reality.

If anyone watch it they will easily connect with the Real Life. It’s Just Perfect from all aspects. There are no extra drama, dress up, make up, even no extra dialogue & more character also..

So many problems happen in our life everyday, but we actually don’t know how should deal with those situations.

But it’s very easy to understand if we able to be calm in that time, not necessary to show our temper. Even if we can calm our mind down, sometimes can’t understand what should say in that time which makes lite the situation.

HATS OFF to the writers. A big credit should goes to the WRITERS & MAKERS who could do it. There were a lot problems, difficulties but only using few DIALOGUES how they changed the situation, it’s amazing. I think it should be learning for the Audience.

I think, there have bias comments about all songs are superb in any serial. But in KRPKAB Each & Every SONG is SUPERB, Just PERFECT with the situation. I remember I’d never watched any hindi serial due to I couldn’t understand hindi.

But I came here after watching Mahabharat, listening its Title Track during lockdown. All songs are mood changing to me specially this TITEL TRACK, RANG RAHI HOON & THODI SI TERI. Before knowing lyrics, it’s tune touched me.

Other than writers, makers, there was masterpiece of SHAHEER’s ACTING. I think all actors well nailed with their role but Shaheer’s acting was at a level. There were so many shades in Dev’s Role. Every shades of Dev he played, is just amazing & for that he achieved Star Of The YEAR 2016.

His expression, his throwing voice says all whenever he comes on the screen. Every minute expression of #ShaheerAsDev is addiction for me.

Erica was also so natural & her chemistry with Shaheer was so matured & will remain favourite forever. There was no typical villain like other soap but there was also problems like each other’s Relationship.

All charecters get justification at the end. It will never get old, always be remain as NEW ONE. It will always be new #Forever for it’s quality, reality, dialogs & for some common sentimental conversation such as –

Those all are very real. Both the Concept of Season 1& 2 were new but SEASON 2’s concept was more unique. I don’t know it will be happened or not in real life but idea was really amazing. I think everybody should watch it, specially Season 2.

All dialogues will remain new forever when it comes in understanding matter & for that I’ll see it again & again.

Kuch Rang Pyar Ke Aise Bhi – The explanation about it is beyond the word. I don’t know what I’ll say but it is the Meaning of RELATIONSHIP, RESPONSIBILITY & UNDERSTANDING of Each Realationship to me. It’s not a serial, not reel, It’s reality. that’s why it is the best tv series