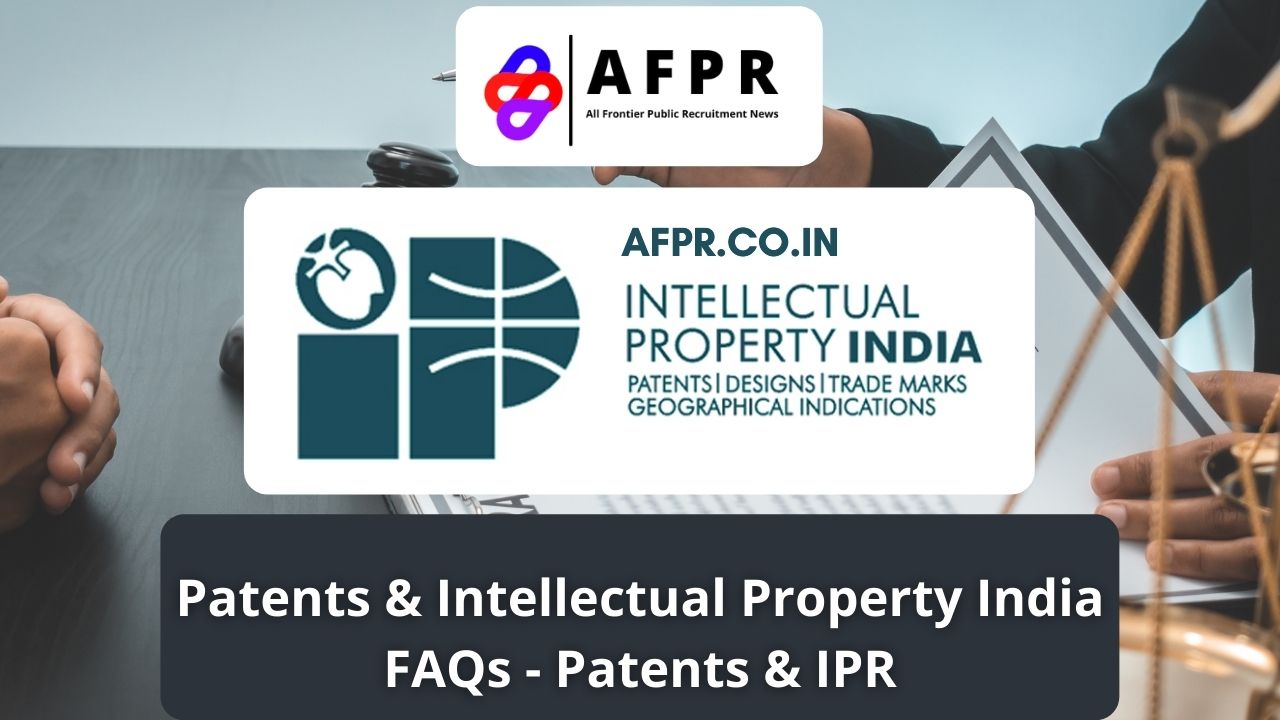 Under the provisions of section 159 of the Patents Act, 1970 the Central Government is empowered to make rules for implementing the Act and regulating patent administration.

What is a Patent in India?

A Patent is a statutory right for an invention granted for a limited period of time to the patentee by
the Government, in exchange of full disclosure of his invention for excluding others, from making,
using, selling, importing the patented product or process for producing that product for those
purposes without his consent.

Criteria of Patentability in India

Types of inventions that are not patentable in India

An invention may satisfy the condition of novelty, inventiveness and usefulness but it may not
qualify for a patent under the following situations:

Related, Startup India: How To Register Your Startup In Just 6 Steps – AFPR

Types of Patent Applications in India

The types of applications that can be filed are:

The following are the e-filing facilities available for an applicant:

Eligibility conditions for registration as patent agents are below,

A person shall be qualified to have his name entered in the register of patent agents if he fulfills the
following conditions, namely —
(a) he is a citizen of India;
(b) he has completed the age of 21 years;
(c) he has obtained a degree in science, engineering or technology from any university established
under law for the time being in force in the territory of India or possesses such other equivalent
qualifications as the Central Government may specify in this behalf,
and, in addition —
i) has passed the qualifying examination prescribed for the purpose; or
ii) has, for a total period of not less than ten years, functioned either as an examiner or discharged
the functions of the Controller under section 73 or both, but ceased to hold any such capacity.

Following documents have to be submitted in original by patent agent after filing them
electronically:

The PCT is an international treaty with more than 150 Contracting States which are bound with
certain formal requirements set out in the Treaty and Regulations. The PCT makes it possible to seek
patent protection for an invention simultaneously in a large number of countries by filing a single international patent application instead of filing several separate national or regional patent
applications however, granting of patents remains under the control of the national or regional
patent offices after the corresponding national phase application has been filed and the national
phase application is assessed as per patent law of that jurisdiction.

As per Indian Patent Act 1970 as amended and the Patents Rules 2003 as amended by (amendment)
rules 2016, any PCT international application may be filed designating India and it shall deemed to
be an application if the corresponding national phase application has also been filed.

Secure Your Life, Top 10 Best Term Insurance In India, You Must Buy In 2022

The PCT System has many advantages for an applicant, for the patent Offices and for the general
public:

ePCT is a WIPO online service that provides secure electronic access to the files of international
applications filed under the PCT as maintained by the International Bureau. The applicants can file
international applications using ePCT-Filing, with RO/IN as well as RO/IB.

Benefits of filing through ePCT

What is the Budapest Treaty?

This is an international treaty governing the deposition of microorganisms, cell lines etc in international approved authority approved by WIPO for the purpose of patent applications in any country that is a party to it. Because of the difficulties and, on occasion, of virtual impossibility of reproducing a microorganism from a description of it in a patent specification, it is essential to deposit a strain in a culture collection centre for testing and examination by others.

There are many international depositories in many countries, which are recognized under the Budapest Treaty. IMTECH, Chandigarh is a recognized depository in India.

What is the term of a patent in the Indian system?

Which Act governs the patent system in India?

The patent system in India is governed by the Patents Act, 1970 (No.39 of 1970) as amended by the Patents (Amendment) Act, 2005 and the Patents Rules, 2003. The Patent Rules are regularly amended in consonance with the changing environment, most recent being in 2016.

Does Indian Patent give protection worldwide?

No. Patent protection is a territorial right and therefore it is effective only within the territory of India. There is no concept of global patent.
However, filing an application in India enables the applicant to file a corresponding application for same invention in convention countries or under PCT, within or before expiry of twelve months from the filing date in India. Patents should be obtained in each country where the applicant requires protection of his invention.

What can be patented in India?

An invention relating either to a product or process that is new, involving inventive step and capable of industrial application can be patented. However, it must not fall into the categories of inventions that are non- patentable under sections 3 and 4 of the Act

When should an application for a patent be filed?

An application for a patent can be filed at the earliest possible date and should not be delayed.

Can any invention be patented after publication or display in the public exhibition?

Generally, an invention which has been either published or publicly displayed cannot be patented as such publication or public display leads to lack of novelty. However, under certain circumstances, the Patents Act provides a grace period of 12 months for filing of patent application from the date of its publication in a journal or its public display in an exhibition organised by the Government or disclosure before any learned society or published by applicant. The detailed conditions are provided under Chapter VI of the Act (Section 29-34)

Does the Patent Office keep information of the invention secret?

Yes. All the patent applications are kept secret upto 18 months from the date of filing or priority date whichever is earlier and thereafter they are published in the Official Journal of the Patent Office which is published every week and also available on the IPO website. After its publication, public can inspect the documents and also may take the photocopy thereof on payment of the fee as prescribed.

Is it necessary to visit the Indian Patent Office to transact any business relating to patent application?

It is not necessary to visit the patent office to file the application as online filing facility is provided. Only in case the application is required to be filed offline, the same can be filed physically at the counter of the Office. Moreover, all the communications with the office are made through emails. However, hearing proceedings relating to patent application can be attended with prior appointment on any working day during prosecution stage.

Where can one find the information relating to published/ granted patent application?

The information relating to the patent application is published in the Patent office Journal issued on every Friday. This is also available in electronic form on the website of the Patent Office, www.ipindia.gov.in

What are the contents of the Patent office Journal?

Can one subscribe a copy of the Patent office Journal?

There is no need to subscribe the Patent Office journal as same is published online and is available free of cost on patent office site i.e. www.ipindia.gov.in

Who can apply for a patent?

A patent application can be filed either by true and first inventor or his assignee, either alone or jointly with any other person. However, legal representative of any deceased person can also make an application for patent.

How can I apply for a patent?

Is there provision for filing patent application electronically by online system?

Yes, one can file patent applications through comprehensive online filing system at
https://ipindiaonline.gov.in/epatentfiling/goForLogin/doLogin. More information for filing online application is available on the website of Patent Office i.e. www.ipindia.gov.in.

How can one register for online filing of patent application?

In which language can an application for patent be filed with the Indian Patent Office?

An application for patent can be filed either in Hindi or English.

Is there any jurisdiction for filing patent application in India?

Is it necessary to file a provisional Patent application in India?

When is an application for patent published?

Every application for patent is published after expiry of 18 months from the date of its filing or priority date whichever is earlier.

What are the facilities available for an applicant to pay the fees?

The applicant can pay the fee either at cash counter or online through a comprehensive payment gate way which includes net banking, payment by Debit/Credit card. More than 70 banks are part of this payment gateway.

A patent application is not examined automatically after its filing. The examination is done only after receipt of the request of examination in Form 18 either from the applicant or from third party or Form 18A for expedited examination (under conditions as prescribed in the Rules).

What happens when applicant is not able to meet the requirement within the prescribed time?

If the applicant does not file a reply within 6 months or does not take an extension of 3 months, the application is deemed to have been abandoned.

Is there provision for extension beyond time limit of 9 months?

No, there is no provision for extension of time beyond the said period.

What is time limit for filing the representation for pre-grant opposition?

A representation for pre-grant opposition under section 25(1) of Patents Act, 1970 can be filed, on Form 7A within six months from the date of publication of the application u/s 11A or before the grant of patent.

Is there any fee for filing such representation for pre-grant opposition?

No, there is no fee for filing representation for pre-grant opposition? This can be filed by any person.

What are the grounds for filing representation for pre-grant opposition?

The grounds for filing pre-grant opposition are contained in section 25(1) of the Patents Act 1970.

What is the time limit for filing post-grant opposition in the patent office?

The time for filing post-grant opposition is 12 months from the date of publication of the grant of patent in the official journal of the patent office.

Is there any fee for filing post-grant opposition?

What are the grounds for filing the post grant opposition?

The grounds for filing post-grant opposition are contained in section 25(2) of the Patents Act 1970.

When can a patent be restored after its cessation?

What is start up criteria?

Start-up means an entity, incorporated or registered in India under the ―Start-up India: Stand-Up India” initiative of the Government of India.

Disclaimer:-The replies given to the probable questions are for the purpose of guiding the public and cannot be quoted in any legal proceedings. They will have no legal purpose. The users are advised to refer to the provisions of the Patents Act 1970 as amended and the Patents Rules 2003 as amended including the latest fee schedules, available at www.ipindia.gov.in