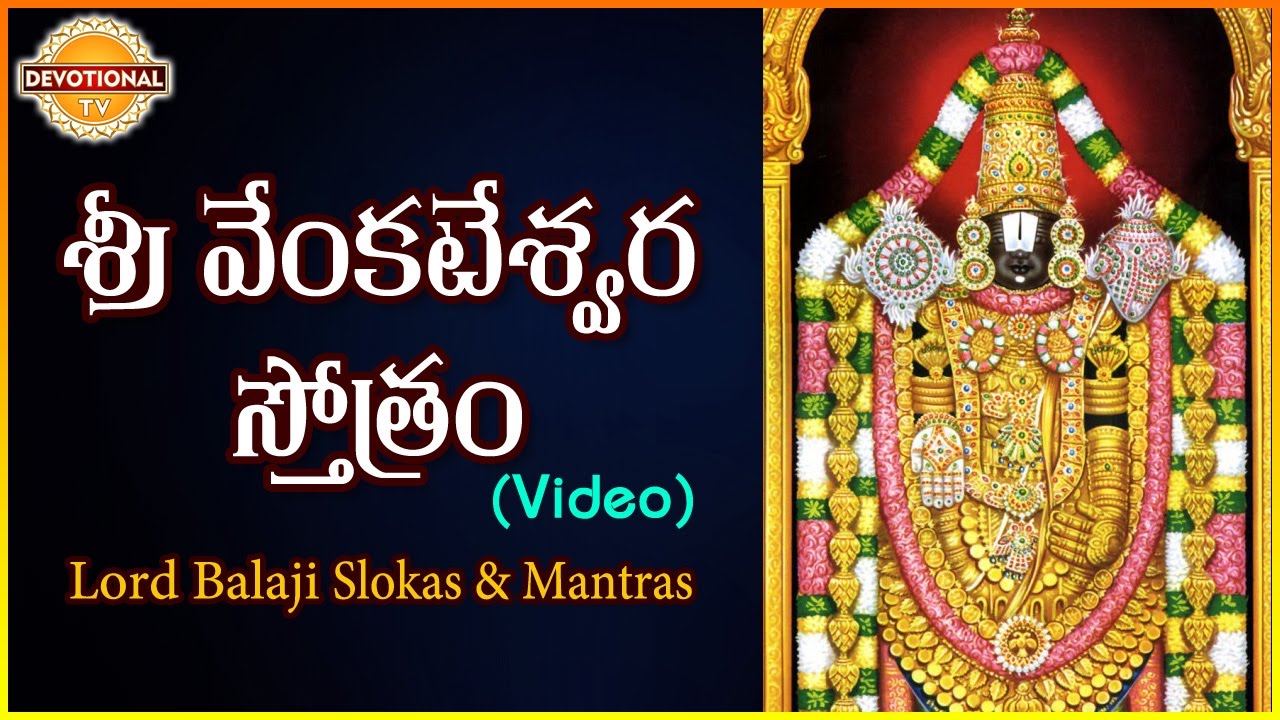 The meaning of Venkateswara is “Lord of Venkata”.

It is a combination of the words Venkata (the name of a hill in Andra Pradesh) and Isvara meaning “Lord.”

In fact, the Brahmanda and Bhavishyottara Puranas describe the word Venkata as “destroyer of sins” where vem means sins and kata means the power of immunity.

Lord Venkateswara: Everything About God Venkateshwara

Venkateswara Swamy is an incarnation of Lord Vishnu who appeared in the Kali Yuga age for the salvation and upliftment of humanity.

In fact, Venkateswara Swamy is considered to be the supreme form of Vishnu in this age of Kali Yuga.

Venkateswara Swamy is an incarnation of Lord Vishnu who appeared in the Kali Yuga age for the salvation and upliftment of humanity.

The Venkateswara Swamy Temple which is located in the Tirumala Hills in the temple town of Tirupati (Andra Pradesh) is called as Kali Yuga Vaikuntam.

‘Karta Karayite chaiva prerakas syonu modaka’ which means one who organizes or executive a noble task, encourages, approves and derives pleasure from it, enjoys all fruits of such a meritorious act. We earnestly appeal to all philanthropists to contribute generously to ‘Sri Venkateswara Aalayala Nirmanam Trust (SRIVANI) and participate in this sacred endeavour.

There is need for construction of Sri Venkateswara Swamy Temples, providing amenities to perform religious rituals, functions and festivals and also renovate, protect, preserve and maintain Gopurams and archaeological buildings temples in every village and in every town for universal welfare which reflect the glory of Indian Culture, Tradition and History .

The donors can contribute any amount towards this scheme.

Lord Venkateswara is depicted as having a dark complexion and four hands.

So, he first went to Satyaloka, the abode of Lord Brahma.

At Satyaloka, Sage Bhrigu found that Lord Brahma was reciting the four Vedas with each of his four heads. He was attended upon by Saraswati.

Sri Mahalakshmi was in service of Lord Vishnu sitting beside his feet.

Thinking that Lord Vishnu did not notice him, the Sage got infuriated and kicked the Lord on His chest. 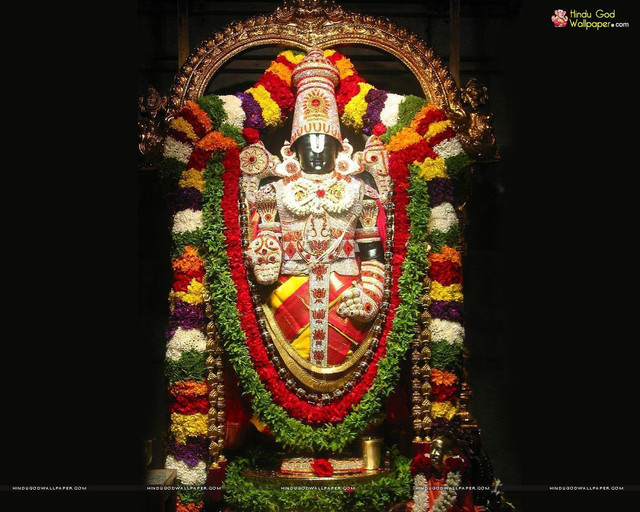 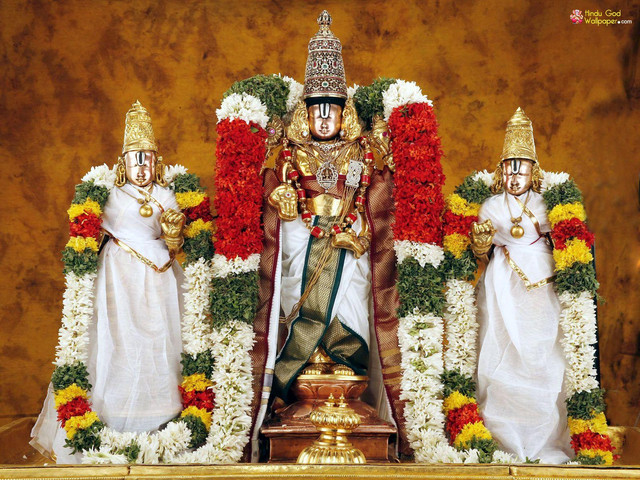 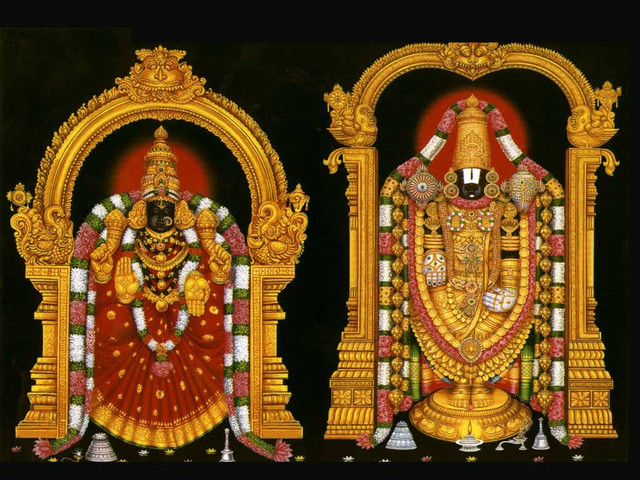 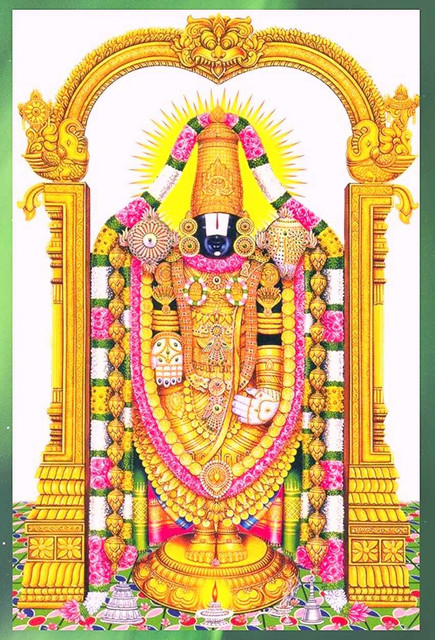 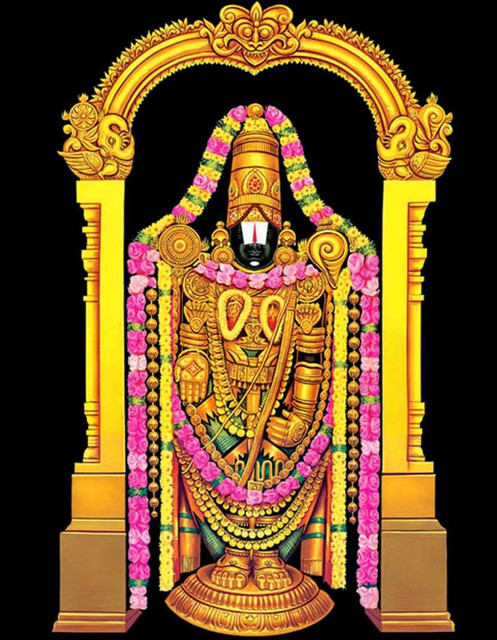 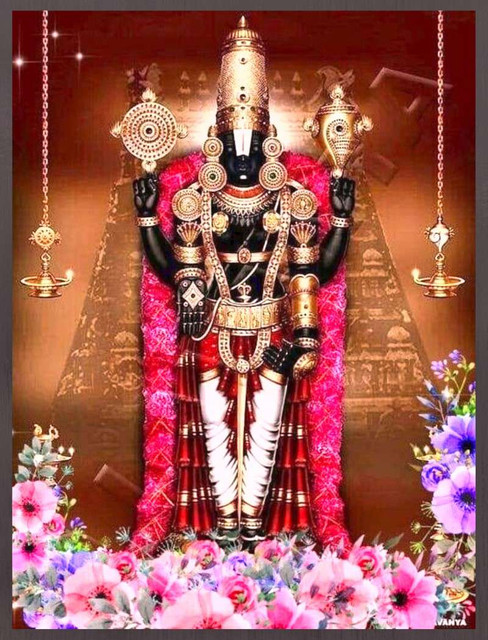 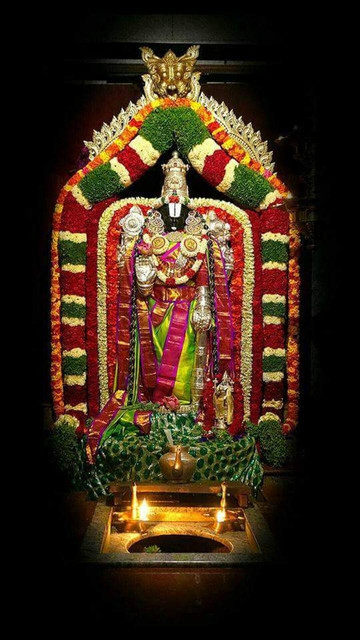 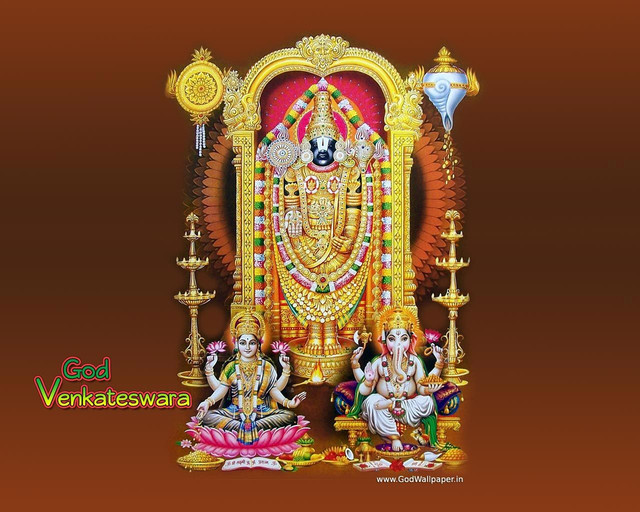 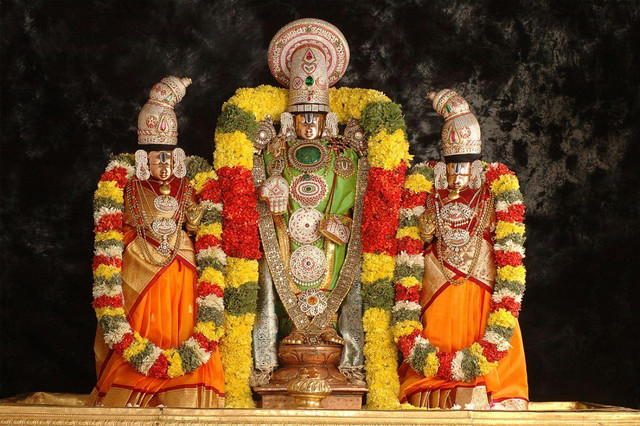 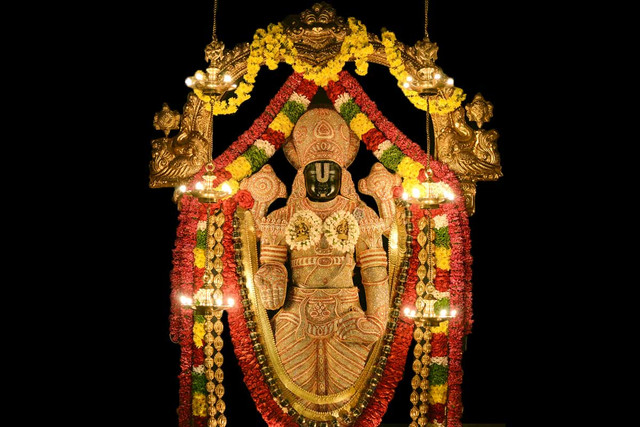 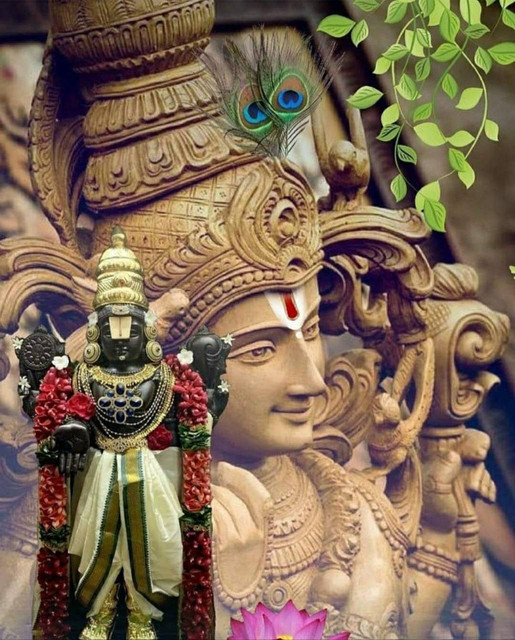 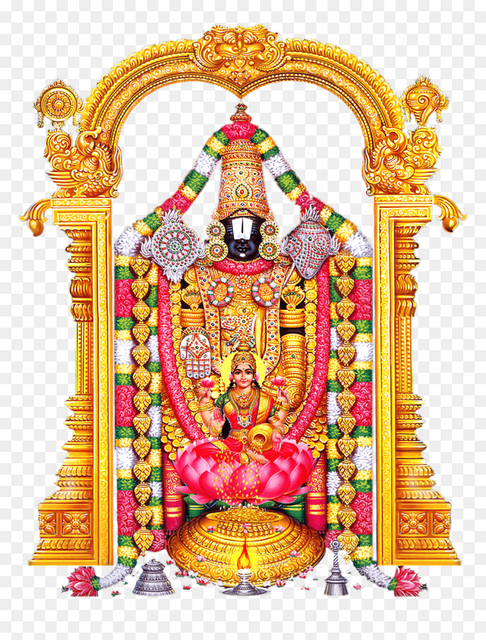 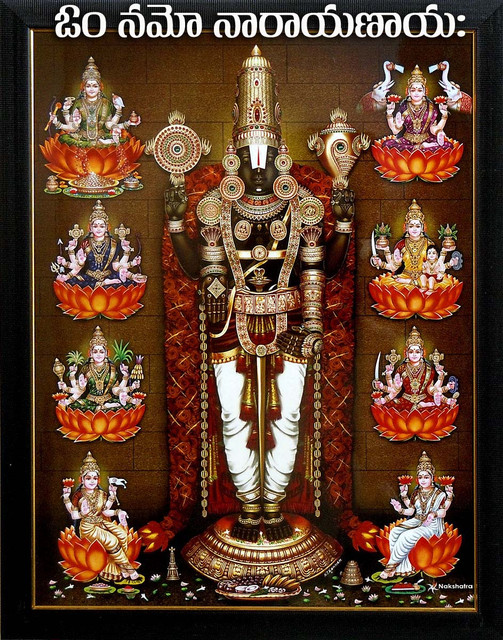 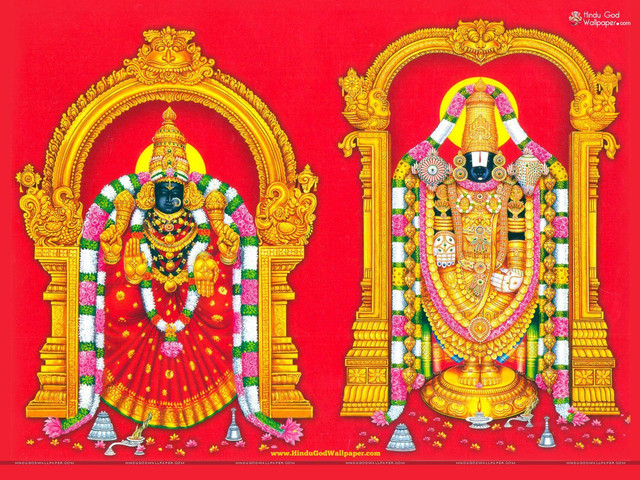 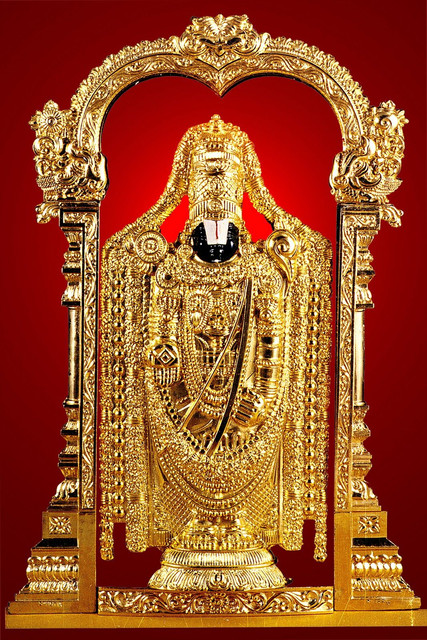 Meaning: Lotus like breasts of Lord are ever red with the colour of kumkum that is being sprinkled on his chest during daily worships, whereas his body is blue coloured. Victory to Thee, O Lord of Venkata hill, whose eyes are wide like lotus petals.

Meaning: Including the four-faced Brahma, six-faced Kumaraswamy (Subrahmanya swami) and five-faced Hanuman, you are the greatest crown jewel among all angels. You are the abode of kindness to those who submit themselves at your feet. O Lord of Vrisha hill, save me.

Meaning: Extremely trembling on being committed various sins and hundreds of wrong deeds, I came running speedily to submit myself at your feet. O Lord of Vrisha hill, shower mercy on me.

Meaning: O bounteous Lord of Venkata hill, who gives away always more than your devotees desire, all the other angels (gods) salute to you, and none is equal to you.

Meaning: With an enchanting music from your flute, you attracted the gopis and bestowed each one of them with their desired happiness that is equal to that obtained from hundred crore penances or crores of prayers. O Son of Vasudeva, none is equal to you.

Meaning: You have been the lovely and virtuous son of Dasharatha, the only courageous and great archer of entire world, the chief of Raghukula, the pleasing and entertaining Lord. Please grant boon to me, O Lord and ocean of mercy.

Meaning: Your pretty hands are held by daughter of Earth, Sita and you are beautiful with your lotus-like face resembling moon. You are the king dispelling darkness by walking in nights. Grant me refuge O Rama of Raghu clan.

Meaning: You are pleasant faced, good hearted, easily reachable and provider of happiness; along with your brothers and with a never ending flow of arrows. So, I never pray anyone else even for a while except you, O Rama.

Meaning: Without you, O Venkateshwara, I am an orphan. I always keep remembering your name. O Venkatesa be pleased with me, bestow me with your love and grace.

Meaning: I have been far away from your lotus like feet and have come now with a wish to serve the feet; so, Lord Venkatesha, I request you again and again to please allow me the benefit of performing a good service to you.

Meaning: The sins committed by me are all simply due to sheer ignorance of mine; so kindly please pardon me, pardon me, O jewel of Sesha saila mountain

What is the meaning of the word Venkateswara?

Venkateswara actually means Lord of Venkata. The word is actually a combination of two words. The first word ‘Venkata‘ is the name of a hill in Andhra Pradesh where the Lord resides and the second word ‘Isvara‘ means Lord. Also, “Venkata” is a Sanskrit word meaning “destroyer of sins” where ven means sins and kata means to destroy.

What is the story of Lord Venkateswara?

Payback of Kubera’s Loan – As per the legend, Lord Venkateshwara took a loan from Kubera for his wedding arrangements with Padmavathi. A large Hundi is present inside the temple complex where devotees offer money and gold to God. Devotees donate with the belief that he can pay back the loan to Kubera.

What is the miracle of Lord Venkateswara?

An Amazing miracle happened at midnight on 7th November 1979 at Tirumala Tirupati Temple. At that time, the whole town of Tirumala was in a deep sleep.
Suddenly, the huge bronze bells, that were hanging in front of Lord Venkateswara inside the Sanctum, started to ring loudly on their own without anyone touching them. The sound of the Bronze bells shocked the Purohits, security staff, temple staff, and the pilgrims.

How many wives does Lord Venkateswara have?

Who was the son of Lord Venkateswara?

According to the Vishnu Purana, Kamadeva– the Lord of love and sexuality was the son of Lord Vishnu and Goddess Lakshmi. Also, Naraka Asura was the second son of Lord Varaha with his wife Bhudevi.

What is the appearance of Lord Venkateswara?

Lord Venkateswara is shown as having a dark complexion and four hands. In his upper two hands, Lord Venkateswara holds a discus (a symbol of power) and a shell (a symbol of existence). His lower hands are inclining downwards wherein the Lord asks the devotees to have faith and surrender to him for protection.

Why Lord Venkateswara’s eyes are covered?

Lord Venkateswara’s idol wears a white mask that covers his eyes. It is believed that the devotees cannot face the powerful radiation arising from the eyes of the Lord. Hence, the eyes are covered on most days except on Thursdays when the size of the eye is relatively smaller.

How tall is Lord Venkateswara in Tirumala?

The height of the statue of the Lord Venkateswara is around 9′ 9″ (nine feet and nine inches) which includes the crown over his head. Also, the statue stands on a stone pedestal which is 18 inches in height.

Which day is for Lord Venkateswara?

Yes, Balaji and Hanuman are the same God in different forms. In the Northern area, most of the people call Bal Hanuman as Balaji Maharaja. However, in South India, Balaji is being referred to Lord Venkateswara only and not Hanuman.