Virat Kohli has decided to Leave Captaincy after India’s T20 World Cup in the United Arab Emirates, Oman. Virat Kohli is aged 32-year-old, Recently he made an announcement on social media Twitter & Instagram, that he felt that he needs to give himself more space to be fully ready to lead the Indian Cricket Team in ODI and Test formats of Cricket. He led India in 95 One Day Internationals, with massive 65 wins along with 27 heart-breaking defeats, A winning percentage of 70.43%, He also led the Indian Team been the T20 captain, In which India has won 27 times and lost 14 times.

BCCI Honorary Secretary Jay Shah stated the team is ready to transition after Kohli steps down as captain.

“We have a clear roadmap for Team India. Considering the workloads and ensuring that we have a smooth transition, Mr. Virat Kohli has decided to step down as T20I Captain after the upcoming World Cup”

“I have been in discussions with Virat and the leadership team for the last six months and the decision has been thought through. Virat will continue to contribute as a player and as a senior member of the side in shaping the future course of Indian cricket.”

Let’s see what more changes will be there for the Indian cricket team, we wish Virat all the Vert best for the upcoming t20 world cup and respect his decision completely.

That’s All for this Article, Until Next Time

Yes, He is Leaving Captaincy after T20 World Cup 2021 in Dubai, But he will be the Captain in Test and ODI formats of Cricket 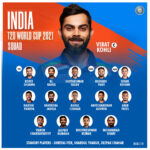